Antimalware Service Executable is a background process of Windows Defender, the in-built anti-malware software of Windows OS. Its executable file is MsMpEng.exe. The tasks of this process include conducting background system scans, checking files and apps for malware when opened by the user, installing updates, and other things. These functions consume a significant portion of the RAM, disk space, and network bandwidth.

In other words, the antimalware service executable has a high CPU usage, which adversely affects other functions of the computer. The user may thus experience a slowdown. When a system scan is in progress by Windows Defender, such a slowdown is usual. Other tasks are halted for the time being, and one simply has to wait for the scan to be completed. 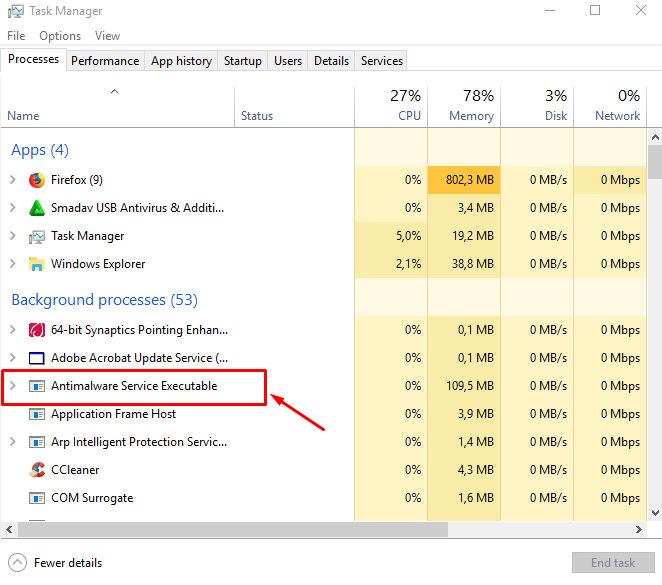 However, such a full scan must be conducted only periodically, and not on a daily basis. Due to faulty settings, the scan may be scheduled to happen daily, or whenever the computer restarts. It takes the CPU, and leads to lagging, affecting other functions on the device. Thus, we discuss ways to rectify this issue in this article.

The following are the methods to fix the problem of high CPU usage by Antimalware Service Executable process.

There is a possibility of the MsMpEng.exe process being affected by malware. Often, malware can assume the names of regular files (including MsMpEng.exe) and exist on your computer. Thus, using a third-party antimalware program downloaded online may help detect any such malware.

Rescheduling the Windows Defender scan can rectify the problem of high CPU usage. The following are the steps to reschedule the process.

Step 1: Go to Task Scheduler. This can be done by typing “task scheduler” in the Windows search bar and opening it. Alternatively, type “taskschd.msc” in Run dialogue box (to open it press Windows + R) and press Enter.

Step 5: Under Windows, find and open the Windows Defender folder.

Step 9: Then go to the Conditions tab, and uncheck all options to clear scheduled scans. Then click, OK.

Step 10: Now, you must reschedule the scans. Open Properties window again, then go to Triggers tab and schedule new scans at times of your choice. A weekly or monthly scan is ideal.

Step 11: Repeat the entire procedure from steps 7 to 10 in case of the following options:

This method is possible is certain advanced versions of Windows. In case your system enables it, try it.

Step 2: The Local Group Policy Editor window will open. In its left panel, select and expand the folder Computer Configuration.

Step 3: Under this folder, select and expand the following folders one after the other – Administrative Templates > Windows Components > Windows Defender.

Step 5: In the window that will open, select the “Enable” option. Then click Apply and OK.

Step 6: Restart the computer and check whether Windows Defender has been successfully turned off.

In case, the first way is not possible on your computer, try disabling Windows Defender through the Registry. Follow the steps below:

Step 2: In the Registry Editor window, navigate as follows:

Step 3: In Windows Defender folder, locate the item DisableAntiSpyware, and double-click it

The high CPU usage by Windows Defender can be reduced by adding its executable file MsMpEng.exe to the Exclusion List. This will prevent it from scanning itself, hence reducing CPU usage. Following are the steps of this method:

Step 2: Locate the Antimalware Service Executable process and right-click on it. Then select Open File Location.

Step 5: Select “Add and Exclusion” option, then click on “Exclude a .exe, .com or .scr process”

Step 6: Paste the file path you copied, and click Add.

Often, Windows Defender gets faulty virus definition updates. This leads it to flag even secure files as malware. We can remove such bad updates if they exist. Following are the steps to do so:

Step 3: Then, type the following commands and press Enter after each (make sure to include the commas):

The process will take some time. After its completion, check if the issue has been resolved.

Thus, different ways to address the issue of high CPU usage by the Antimalware Service Executable have been discussed. While Windows Defender is crucial to the system’s security, there is no need for its background process to run always. If this issue can be resolved, the overall functioning of the computer shall not be impeded.

Service Registration is Missing or Corrupt I 100% Fix