Louisville defeated Michigan 62-50 on Monday night in a rugged game. This is the fourth time in programme history that the Cardinals have advanced to the Final Four. 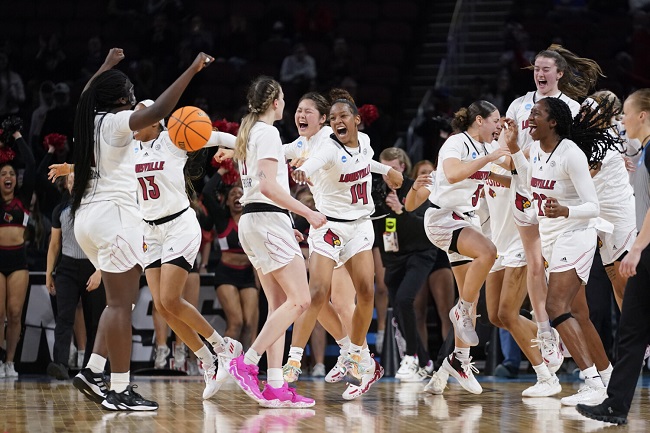 The top-seeded Cardinals (29-4) will play South Carolina next weekend in Minneapolis. Chelsie Hall scored 15 points, and Emily Engstler countered a poor shooting night with 16 boards and some important defensive plays.

With less than three minutes remaining, the No. 3 seed Wolverines (25-7) were within 52-50 when the Cardinals used some slick ball movement to get out of a half-court trap and found Cochran for an easy layup. Then, to give Louisville some space, Naz Hillmon, a standout player for Michigan, was called for charging and Cochran scored again.

This was the second time this season that the Cardinals defeated the Wolverines, and both times the game was decided at the free throw line.

The Wolverines, led by Hillmon’s 18 points and 11 rebounds, were unable to keep the Cardinals in check for the whole game. This was despite holding their previous three tournament opponents to under 50 points to get to their first regional final.

Coach Kim Barnes Arico’s team got out to a slow start, missing their first eight shots, and allowing a heavily pro-Louisville crowd to get pumped, much to the dismay of the Wolverines.

However, with a trip to the national championship on the line, the Maize and Blue determined to put up more of a fight than they did in January, when the Cardinals unleashed a 25-2 run covering the first two quarters and strolled to a landslide 70-48 victory.

Despite Coming off the Bench,

Maddie Nolen hit two 3-pointers. Hillmon went to work on the inside, making easy baskets near the rim when she wasn’t drawing fouls from the Cardinals’ defence. Moreover, the outstanding freshman Laila Phelia, who maybe best exemplifies the trajectory of a rising programme, shook her defender for a couple of easy baskets.

Early on, turnovers became a major issue for Michigan, which is not surprising considering the Cardinals averaged over 20 turnovers per tournament game. The Wolverines played stifling defence in the half court, but Jeff Walz’s team took a 30-27 lead into halftime thanks to 14 baskets scored in transition after the Cardinals forced 11 turnovers.

Michigan’s ability to stay in the game despite 22 turnovers and terrible 3-point shooting is mostly because to a huge discrepancy at the free throw line. Michigan made 15 of 20 free throw attempts, while Louisville attempted only five before being sent to the line for four more in the game’s waning seconds. Thanks for read our Article Louisville Womens Basketball Beats Michigan for Final Four Spot.

Women’s All Around Final How To Watch?