Okay, so they continued the “The Boss Baby” franchise and developed a new instalment.

The 2017 DreamWorks film, based very loosely on Marla Frazee’s children’s book series, gambled big on the appeal of a dyspeptic, super-intelligent, black-suited infant speaking with the voice of Alec Baldwin while doing un-babylike things, and they won big: $500 million at the worldwide box office and an Oscar nomination. 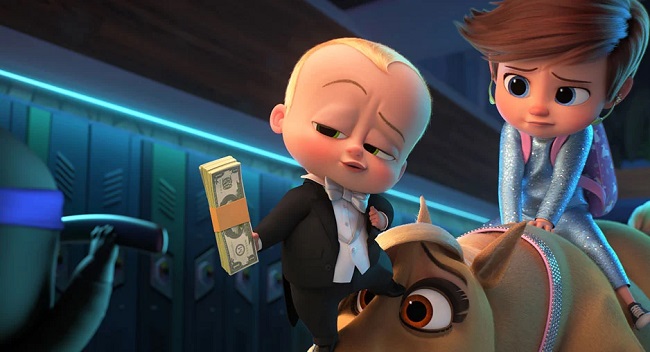 The Boss Baby Family Business Review Pacifier be with You

“The Boss Baby: Family Business” is placing a similarly large bet that family audiences, otherwise starved of new attractions, are ready to return to theatres by arriving in theatres sooner than originally planned and making a simultaneous streaming bow on Peacock.

Despite being a competent affair that includes just enough out-of-the-ordinary aspects to liven up a rather basic remake of the original’s structure, the picture itself is sadly often less engaging than the business problems underlying it.

In Addition, Props to Tom McGrath,

Who returns as director, for having twice accomplished all the normal kidpic paces with a concept this ridiculous. The original “Boss Baby” had a fairly complex plot for a movie with a one-joke premise, as it involved a standard sibling rivalry conflict between a seven-year-old boy and his baby brother, and the twist that the baby, Ted (Baldwin), was actually an undercover agent from the all-powerful Baby Corp.

conglomerate, equipped with specially powered formula and pacifiers, and sent on a reconnaissance mission to take down Big Puppy. Family Business” doesn’t waste any of its over two-hour running time explaining the wider Boss Baby lore, instead going straight into a plot that’s just as complicated.

Now an adult with kids of his own, Tim (James Marsden) from “Boss Baby” has grown distant from his younger brother, Boss Man, a successful businessman who has no recollection of their odd childhood.

(If Donald Trump comparisons were inevitable in the first picture because to Baldwin’s many impressions on “Saturday Night Live,” then the adult Baldwin character here looks deliberately modelled after the disgraced ex-pre-politics president’s image.)

Tim’s eldest daughter Tabitha (Ariana Greenblatt) is ashamed of her bumbling stay-at-home dad, while she idolises her wealthy and powerful Boss Uncle and studies nonstop. Tina, his youngest child, seems like any other baby on the outside, so it comes as a shock when she suddenly changes into a suit and tie and starts talking with the no-nonsense authority of Amy Sedaris.

Tina adds that her infantile superiors at headquarters have dispatched her to reconnect Tim and Ted in order to probe Dr. Armstrong, the smooth-talking technocrat and principal of Tabitha’s competitive private school (Jeff Goldblum).

She first restores their natural ages, turning Tim into a fifth grader and Ted into an infant, before sending them off to school, where Tim has the opportunity to make friends with his own daughter under the guise of a new classmate and Ted must gather his fellow infants to escape the nursery.

There’s something ironically commendable about the way “Boss Baby: Family Business” acknowledges the fundamental dystopian features of its idea while smoothing them down into something so inoffensive, even more so than its predecessor.

The thought of a wide-eyed, diapered baby being saddled with all the cynicism and lovelessness of the corporate world is a depressing one, and there are some admirably strange moments in this film, such as the sight of a vast workfloor populated by toddlers who have been trained to code iPhone apps, that show how easily this light family lark could tip into a brutal capitalist critique.

Even more out-of-place is the little musical performance on the impending climate change apocalypse.

Sadly, these highlights are overshadowed by the film’s more formulaic emotional arcs (Tim grows to love his daughter, Ted rediscovers the value of family), as well as several cultural references that are likely to go over the heads of the film’s intended audience.

(It’s true that this sequel has a lot less toilet-based humour than the original, which is an improvement.) The action scenes are fast and well-choreographed, and the sequences set in Tim’s imagination are the film’s most inventive and colourful, leading one to wonder how much more enjoyable “Boss Baby: Family Business” could have been if this sort of idiosyncratic visual creativity were allowed to flourish throughout. This movie, though, isn’t about anything personal; it’s strictly business.