Pita Taufatofua of Tonga arrived in grand fashion on Friday morning for his third Olympic debut.

When Taufatofua arrived as Tonga’s flag bearer shirtless in the 2016 Summer Olympics in Rio de Janeiro and the 2018 Winter Olympics in Pyeongchang, he made headlines. It was Taufatofua’s third time carrying the flag on Friday, and he didn’t let anyone down. 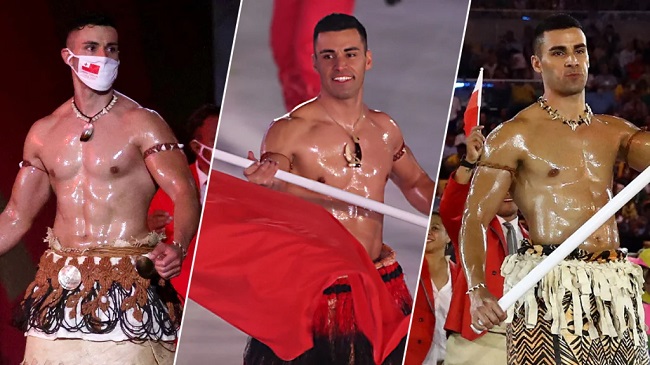 Taufatofua is more than just a pretty face at the Tokyo Opening Ceremony. He plans to represent Tonga in taekwondo at the 2020 Olympics in Tokyo, where he hopes to win the country’s second Olympic medal. In Rio, Taufatofua did not win a medal in taekwondo, and in Pyeongchang, he was knocked out of cross-country skiing in the preliminary round.

At Friday’s Opening Ceremony, Tonga sent not one, but two flag bearers to represent their country. Malia Paseka, who will also compete in taekwondo at the Tokyo Olympics, stood on either side of Taufatofua.

By virtue of her victory in the Oceania qualifying event for the women’s 67 kilogramme weight class in 2020, Paseka becomes Tonga’s first female Olympian in taekwondo.

“When the Chef de Mission stated that the one formally picked to be the flag bearer was from taekwondo, I was thinking, ‘Oh yes, it will be Pita,’ but to my surprise they said it would be me,” Paseka recalled, according to Radio New Zealand. “I felt overjoyed and humbled, but also rather taken aback.”

“I’ve gone to many events before, but this is my first Olympic Games, and I’m just glad truly for the opportunity to be representing my nation and that they trust me to be the flagbearer. ”

Competition in taekwondo will kick off on Friday night. In taekwondo, both South Korea and China earned two gold medals each, but the United States only managed to bring home one bronze.