The middle-distance runner and current holder of two U.S. records, Shelby Houlihan, claims she has been banned from the Tokyo Olympics for testing positive for the steroid nandrolone.

Houlihan claims she is innocent and that the positive drug test was due to the pork burrito she ate from a food truck. 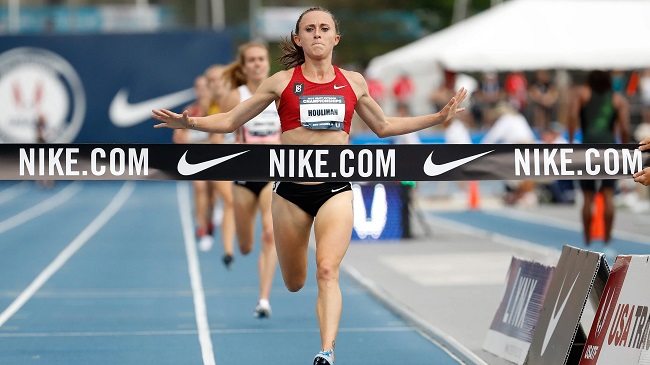 The anti-doping agency disagrees with the runner. Just days before the U.S. Olympic trials for the track and field team begin in Eugene, Oregon this coming weekend, Houlihan was handed a four-year suspension.

Houlihan announced her decision on Instagram, writing, “I feel absolutely saddened, lost, shattered, angry, bewildered, and betrayed by the very sport that I’ve loved and dedicated myself into only to see how brilliant I was.”

Houlihan, who is now 28 years old, will not be allowed to participate in the 2020 Summer Olympics or the 2024 Summer Olympics in Paris. Because of this restriction, she will miss out on what may be the best years of her career and she has vowed to do all in her power to overturn it.

During an emotional online news conference, Houlihan declared, “I’m going to continue to fight to prove my innocence.” “I like and applaud the effort to root out cheaters and drug users in sports. Of course, I can safely say that I am not one of them.”

Professional Opinions on the Steroids in Pork Connection

The Athletics Integrity Unit informed Houlihan in January that a sample dated December 15, 2020, tested positive for nandrolone, and as a result, she was granted a provisional suspension. Since then, she said, she’s sought to show her innocence in a variety of ways, including a meal diary she made after learning of the test result. The Anti-Doping Agency (AIU) was established in 2017 to provide impartial oversight of anti-doping initiatives in international track & field competition.

We concluded that the most likely explanation was a burrito purchased and consumed approximately 10 hours before that drug test from an authentic Mexican food truck that serves pig offal near my house in Beaverton, Oregon,” Houlihan said, referring to the food truck that she had eaten from before the drug test.

Houlihan currently cites research that nandrolone is present in the swine population naturally.

The experts NPR spoke with agree that a connection is conceivable, but less certain.

Keeve Nachman, Ph.D., who is an associate professor at the Johns Hopkins Bloomberg School of Public Health, thinks the steroid would be unlikely to be detected in pork.

According to Nachman, “Nandrolone is not approved for usage in any food animal,” and he said that it is unlawful to employ any steroid hormones in pig production. All we do is use them in cattle and sheep.

The only explanation, he explained, was that it had happened spontaneously. “And I have my doubts that that’s the case.”

But when it comes to the medications used in livestock farming, especially for the production of pigs, chickens, and other meats, Nachman is a bona fide expert.

Even though uncastrated boars have been associated with positive nandrolone test results in the past, Dr. Heather Fowler, who heads the National Pork Board’s division of producer and public health, argues that this type of meat accounts for only a small percentage of the industry.

Although the natural hormones in the meat and organs of intact male pigs (boars) have been shown to affect nandrolone test results, as Fowler pointed out, “the vast bulk of the pork consumed in the U.S. does not come from boars.”

Nachman, citing the same study, said that in the United States, most male piglets are “barrows,” or castrated males.

“Non-castrated pigs are less pleasing in flavour,” he remarked.

According to Houlihan, the test Procedures were Inadequate.

When informed of a positive out-of-competition test result for nandrolone in January, Houlihan and the coaches at her Oregon track club said they had never heard of the substance before. They argue that an unfair testing procedure is to blame for Houlihan’s punishment.

“Please hear me out on this. When it comes to improving my performance, I’ve never used anything like that. That includes the accusation against me, “as she put it.

Houlihan claims that she had a polygraph and had a hair sample analysed, both of which came back negative for a steroid accumulation in her system. On Tuesday, when we asked for her thoughts, she remained silent.

Houlihan’s coach at the Bowerman Track Club, Jerry Schumacher, believes the system has failed her.

From the beginning, we knew the truth would set us free, Schumacher added. Instead, I’ve learned that, so long as 9 out of 10 doping verdicts are real, anti-doping authorities don’t mind condemning innocent athletes.

According to Schumacher, Ajeé Wilson and Jarrion Lawson, two other U.S. track stars who were disqualified for failing drug tests but then exonerated when officials concluded they had eaten tainted meat, are good examples of how Houlihan’s case is similar.

Houlihan says no follow-up testing were done to ascertain whether her first result was due to an anomaly.

According to Houlihan, “my levels were consistent with those of subjects in studies who were tested 10 hours after eating this source,” and “WADA technical guidelines require the lab to consider it when analysing nandrolone,” but “the lab never accounted for this possibility.” WADA stands for the World Anti-Doping Agency.

The End of a Promising Career

On June 11th, Houlihan learned that the Court of Arbitration for Sport had ruled against her explanation, leading to a four-year suspension. On Tuesday, the court stated that, following an online hearing on June 4, she had been found guilty.

“unanimously decided that Shelby Houlihan had failed, on the balance of probabilities, to identify the source of the illegal material,” the court stated, referring to its panel of justices.

The majority of the panel believed that Houlihan had not established that her sample had been improperly handled during testing, the report added.

Houlihan had been aiming to return to the Olympics, having competed in Rio de Janeiro in 2016 following a stellar career at Arizona State University. She appeared to be gaining steam to make a run at a medal this summer after setting U.S. records in the 1,500 and 5,000 metre events in recent years. Her hopes of competing at the Olympics in Tokyo have been dashed.

Runner said she will challenge the verdict in court.

She firmly believes that “you should push your body to its physical limits merely to see where they are” and in the value of participating in extreme sports. “Being dishonest is not something I care to do. There is no reward for me in terms of fame, fortune, or even recognition. It’s a labour of love for me. It’s the highlight of my day and something I look forward to doing every day.”