What can we say about the changes in society, politics, and religion in the Middle East and North Africa ten years after people rose up against their governments in country after country, from Tunisia to Egypt, Yemen, and Bahrain?

Why Tunisia Promise of Democracy Struggles to Bear Fruit 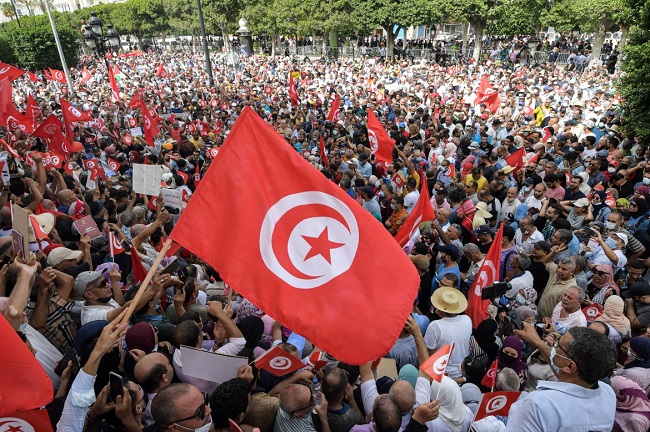 To put it plainly, the “Arab Spring” events shook a whole region on social, cultural, religious, political, and strategic levels. This series of events has left a legacy that is hotly debated and, to some extent, still uncertain: the political landscape in these countries has changed dramatically.

It is true that several countries, including Egypt, have seen a return to authoritarianism since the people reclaimed their political power at the turn of the decade. However, social powers are what ultimately shape history, and they appear to have been irreparably shattered.

The people are increasingly aware that the authority of those in power is not permanent and can easily be overthrown. The question in 2021 is not if a dictatorship can be overthrown or at least pressured into making concessions, but rather what the cost-benefit analysis of such an endeavour would entail. How much are people willing to give up to get their lives back on track?

The redefining of political space in Arab nations is the most noticeable shift. This has been demonstrated time and time again since 2011, from the current uprisings in Lebanon and Iraq to the Hirak movement in Algeria.

It has become more accepted that public displays of discontent across North Africa and the Middle East are harbingers of uprisings and even revolutions, rather than merely a challenge to the authority of the ruling elite.

Each new socioeconomic catastrophe unleashes a wave of genuine, unrestrained opposition to existing administrations. No Arab country is safe, not even Egypt, which in 2013 witnessed a return to authoritarianism that would make regimes in other Arab countries look like child’s play.

Many activists and organisations have developed strategies for speaking out against the administration despite the risks involved. The bulk of the population now bases their decisions on the assumption that the current power structure can be overthrown.

As a result of the Arab Spring, secularism has spread throughout the region’s social and political arenas. The ideal of equal citizenship contributed to, and was strengthened by, the drive toward Democratisation.

When faced with opposition, authoritarian regimes often foster sectarian attitudes and divides in an attempt to diffuse the tensions within their own ranks (Sunnites against Shiites, Muslims against Copts, Arabs against Kurds, and so on).

What this means is that certain governments have prioritised their own survival over the unity of their country by altering the initial narrative, which was largely secular and based on political and social progress as a foundation.

A variety of religious groups, Islamists included, supported public protests during the Arab Spring, although it is still difficult to pass judgement on the involvement of specific religious groups, both at the time and since.

Communication, techniques, and even long-term goals vary greatly among groups, making it difficult to compare Tunisia’s Ennahda, for example, with Hamas in the Palestinian Territories or the Muslim Brotherhood in Egypt.

This is due in large part to the fact that the Arab Spring protests were not religious in character, and were not founded on the imperative of safeguarding religious traditions or, especially, a threatened Muslim identity. The Islamist storyline also did not drive these shifts.

Many religious leaders and groups joined the movement, but they were never able to influence its overall course.

Emerging democracies, beginning with Tunisia, have moved on from the phase of power allocation to enact other regulations, particularly those concerning the capacity to syphon off votes.

Islamist Organisations definitely dominated this field, bolstered by their proclaimed capital of moral and political purity and their well-established capacity to mobilise people.

For this reason, religious issues have been front and centre during the past decade, as constitutional and partisan social changes were obligated to address them alongside the growing influence of Islamist parties in democracies in transition. The breakdown of the Islamist landscape is the most important lesson to learn at the moment.

Jihadism has been a major factor in the Arab world’s political and religious landscape for decades, but the uprisings of the early 2010s gave it a boost.

Parts of these cultures, especially the youth, perceived the Arab Spring protests from two different but interconnected perspectives, and this has contributed to the emergence of jihadism over the past decade.

It was obvious, on the one hand, that the revolutions would not produce results right away. On the other hand, they were no longer firmly established in the here-and-now and in the culture of their native land. Jihadism offered an alternative nirvana to the one promised by the revolution.

As a result, nations like Syria, which is now engulfed in civil conflict and a significant sovereignty issue, became echo chambers for Arab tensions or even laboratories for the emergence of new forms of violent, radical movements.

The Islamist movements that have been the driving force behind the indisputable upsurge in politico-religious violence since 2011 are also rooted in larger social and generational tensions.

A departure from conventional religion, the precarious position of governments, and the myriad social, economic, and psychological stresses weighing on entire people yearning to see their wishes come true all contribute to the rise of jihadism in the region.