On Thursday, officials at a middle school in South Carolina confirmed that a 12-year-old kid had been shot and killed by a classmate. 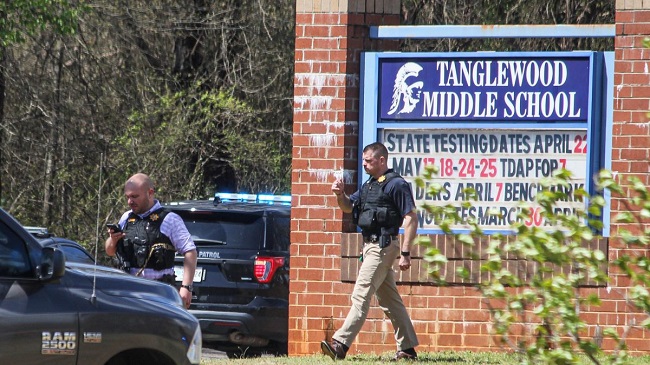 Jackson, Jamari Cortez Bonaparte, was identified as the victim. A family representative released a statement in which they expressed their “devastation” at the news of his death.

According to the Greenville County Sheriff’s Office, the alleged gunman, a 12-year-old boy, was apprehended and charged with murder and other firearm offences in connection with the shooting at Tanglewood Middle School in Greenville.

According to a statement from the sheriff’s department, no more victims of the incident have been identified.

Officials say a school resource officer reported hearing gunfire on Thursday about 12:30 p.m. and immediately asked for backup. The sheriff’s office reported that investigators later determined the two students who were shot knew one other.

The suspect reportedly fled the school after the shooting and was later located by deputies hiding under a deck at a neighbouring residence. A weapon was reportedly found following the arrest.

He stated, “My heart hurts for this young boy’s family and my thoughts are with them tonight.” Sheriff Hobart Lewis said in the statement.

“I’ll also be saying prayers for the family of the other young man who pulled the trigger. I simply not understand what would motivate someone to do this to another human being and especially at that age, but I know it’s a circumstance where we all need to turn to God.”

The sheriff’s office has claimed that the motive for the shooting and the suspect’s access to the weapon are still under investigation.

The sheriff’s office stated that the suspect was also charged with unlawful possession of a weapon by a person under the age of 18, possession of a handgun on school premises, and murder.

The Suspect is being Taken to a Juvenile Detention Facility in Columbia.

For their own sake and the sake of others, the sheriff urged parents to have open dialogue with their children.

“Make sure they aren’t carrying around any weapons or other items that could put them or others in risk. It takes a village, and we need everyone to pitch in “That’s what Lewis remarked.