ESPN has confirmed that Rachel Nichols, who was scheduled to be ABC’s sideline reporter for the NBA Finals, will not be working the first game of the series on Tuesday night. Malika Andrews has been tapped to take her position.

Nichols has covered the NBA Finals for ESPN the past two years and has covered several of the season’s most pivotal games for the network. Disney owns both ABC and ESPN. 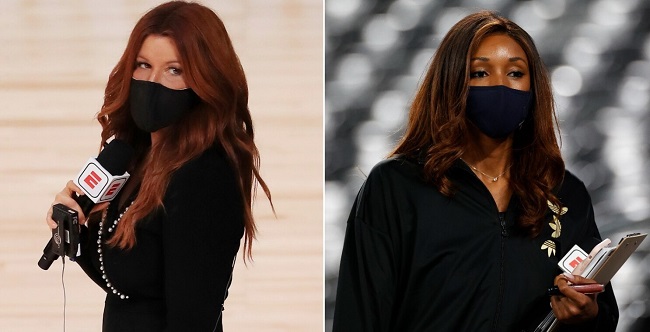 ESPN has released a statement stating that they agree that this is the best move for all parties involved in order to maintain attention on the NBA Finals.

They were Said During a Private Phone Chat in July,

while she was sequestered in a hotel before the NBA season started in Florida. She was chatting with political strategist and adviser to Los Angeles Lakers player LeBron James, Adam Mendelsohn. ESPN employees all around the world were exposed to the embarrassing phone call when it was recorded on video and uploaded to a server at the company’s headquarters in Bristol, Connecticut.

Nichols said to Mendelsohn, “I wish Maria Taylor all the luck in the world; she covers football and basketball.” From a female perspective, “if you need to give her more things to do because you are feeling pressure about your awful longtime record on diversity, then by all means, do that.” You should look for it elsewhere. I will not give it to you, nor will I allow you to take what is mine.

Both current and former ESPN workers, as well as NBA players, have spoken out over the comments over the previous two days. On Tuesday morning, former prominent ESPN staffers, including Dan Le Batard and Jemele Hill, debated the issue on Le Batard’s show. Memphis Grizzlies point guard Ja Morant tweeted his support for Taylor.

Commentators have discussed ESPN’s disciplinary measures and management, as well as the apparent friendship and professional relationship between Nichols and Mendelsohn, highlighting the scandal’s wide-ranging complexity. Concerns about invading personal privacy were raised by some.

Others brought up Nichols’ marriage to Diane Sawyer’s sister in a conversation about white privilege and professional success, and how that may have helped Nichols get ahead.

On Monday, Rachel Nichols presented an episode of “The Jump,” and ESPN announced early Tuesday that she will lead the show daily from the venues of the games during the finals. Schedules said that “The Jump” would air on ESPN2 at 4 p.m. Eastern on Tuesday, but the show “Jalen & Jacoby” actually aired at that time.

Nichols made a public statement on the recording and what she said about Taylor on Monday’s broadcast of “The Jump,” for which she has served as host since 2016.

Because she didn’t want to detract from the NBA playoffs, she kept her remarks brief. Nichols continued, “I did not want this time to go by without saying how much I respect, how much I love our colleagues here at ESPN, how terribly, deeply sorry I am for disappointing those I wounded, notably Maria Taylor, and how thankful I am to be a part of this wonderful team.”

African-American former NBA players Kendrick Perkins and Richard Jefferson, who are also regulars on “The Jump,” joined her on the show. Nichols was complimented by Perkins, who said that he knows her heart and that she is a “wonderful person, fantastic individual” for “accepting responsibility.” The same may be said of his compliments to Taylor.

Andrews, a former Times reporter, is making his commentary debut as part of the finals broadcast team.

During the NBA Finals, Taylor will serve as host of ESPN’s “NBA Countdown,” a pregame and halftime show.

However, ESPN might have a problem on its hands if the NBA Finals between the Phoenix Suns and Milwaukee Bucks go to a seventh game. Taylor’s contract with ESPN is set to expire at the conclusion of the playoffs, and a renewal has not been finalised as of yet.