The inability to attend synagogue on the holy day of Shabbat and then host other congregants for a home-cooked meal has been one of the most difficult adjustments for me to make since the outbreak of this pandemic. 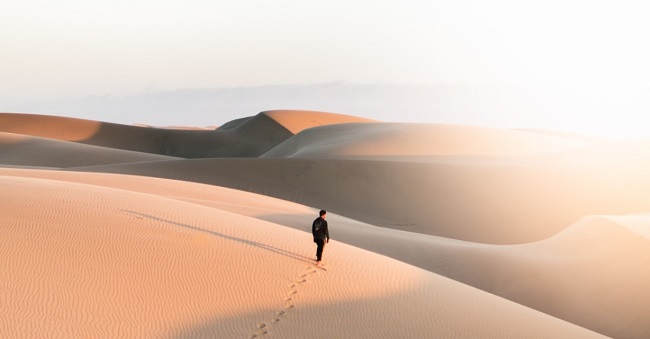 On the other hand, I can use my newfound alone to study Torah independently, which is particularly helpful as I try to make sense of the weird uncertainties we currently face. The famous lines we recite on Yom Kippur about who shall survive and who shall die were thrown into full focus upon hearing the latest data – that close to 100,000 Americans had died from COVID-19.

What I know now about Yom Kippur makes me wish I’d uttered those words with a greater sense of urgency last year.

The Israelites’ 40-year trek from Egypt to the Promised Land is chronicled in Moses’ fourth book, Bamidbar (commonly known as the Book of Numbers), which we started reading last week. I can’t help but sense a strong resemblance to their predicament as they trekked through the desert, unclear of how long the journey would take or who would make it.

The Israelites’ trek through the desert was not expected to take longer than eleven days, according to God’s original plan. Since God is omnipotent, He could have helped them reach their destination more quickly; nevertheless, He did not, leading many to conclude that this was divine punishment for the Israelites’ disobedience.

Most Academics Think that the Israelites:

Israelites Downfall was precipitated by the sin of the spies, despite the fact that they disobeyed God’s authority on other occasions (the most egregious of which was the construction and worship of a golden calf). Twelve leaders from different tribes were dispatched by Moses to explore Canaan, and all but two of them reported back that the natives there were far too powerful for the Israelites to ever win. All the folks we’ve met are tall and imposing. Our impression of them was the same as our own: that of grasshoppers.

Of course, this lowered morale among the Israelites and contributed to their feeling of sorrow over having to flee Egypt as slaves, despite the dreadful conditions there. They asked God why he’d lead them to a place where they’d be killed by the sword. Let’s choose a leader and go back to Egypt!

How long will they not believe in Me after all the signs I have performed in their midst?” God exploded angrily. I’m going to wipe them out with a plague.

It’s interesting how the word “plague” acquired its archaic connotations. I’ve always had compassion for the people of bygone eras who lacked access to modern medicine. Just like the terrifying thick mist of the 10th plague, the killing of the firstborn, creeping quietly from home to house in Cecil B. DeMille’s “The Ten Commandments,” the same word seems to be circling outside my door today.

Luckily, God changed his mind. Instead of wiping the Israelites off the face of the earth, he made them roam the desert for 40 years, killing off every last one of them. Why? Most rabbis believe that the Israelites had a slave mindset and lacked the wherewithal to establish their own country because they preferred life under a ruler that had oppressed them to the freedom that came with it.

However, there is an alternative interpretation. My friend Alan Hirshman, who discusses the weekly Torah portion with his fellow shul members (now on Zoom), recently brought up an interesting point: the children of Israel also required considerable time to consider how to proceed, how to grow and prosper in spite of the new, very harsh, unpredictable conditions.

We are now in the unknown wilderness as well. Some of us, after two months of seclusion, are taking calculated chances by opening up a little: letting a cleaning service into our houses because we can’t get rid of all that dust and dirt on our own, or, in states like Massachusetts, returning to the barber shop. We may be using protective gear like masks and gloves, but that is no guarantee of safety.

Still, just think how much worse things would be if this deadly virus had spread over the world a decade ago. We wouldn’t have been able to see the faces of our friends and family members when chatting, of our coworkers during staff meetings, or of our rabbis and fellow congregants during lectures or services if not for the advent of modern technologies such as Zoom and Facebook Live. Not being able to see their “teachers” and “peers” on the screen would have made our kids’ “attending” school experience much less realistic. We now see how vital this face-to-face contact is, and how much the telephone could never replace it.

People who choose to live alone would be more likely to experience actual loneliness if not for virtual communication tools like Zoom. This would have been the most tragic consequence of isolating people from one another, bringing unimaginable misery and sorrow to countless numbers of people. Solitary confinement in jails has been roundly denounced for good cause by psychologists and prison activists: it is nothing short of a form of torture.

The capacity to communicate with other people through the medium of visuals, as well as to work with them, learn from them, and be delighted by them, has been an incredible psychological boon as we face this terrifying real-world dystopia. For those fortunate enough to be “trapped at home” with their kids or elderly parents, this has been an opportunity to spend more quality time together as a family than would have been possible when everyone could go their separate ways to work, school, and other activities.

From my Conversations with Parents,

I can tell that many are growing closer to their kids by assisting them with their schoolwork, going on hikes with them in the relatively safe outdoors, and sharing meals with them, all of which serve to strengthen bonds and create cherished memories for all involved.

Similarly to the Israelites, we find ourselves lost in the desert without a map or a compass. Despite the fact that our technology hasn’t been able to stop this latest epidemic, it has enabled us maintain connections with one another on all levels of existence. This is the biggest miracle that has happened to us until we find a cure for the coronavirus. Thank for read our Article How Long did the Israelites Wander in the Desert.