Dana Canedy said she only expected a page or two from her quiet, reserved fiance, Army 1st Sgt.

Charles M. King, when she gave him a journal in late 2005 to write some words of encouragement to their newborn son.

Nearing retirement, King was leaving for his final overseas mission. Canedy, who was a few months along in her pregnancy, wanted to make sure that the words “I love you” were written down next to King’s name in a book, just in case. 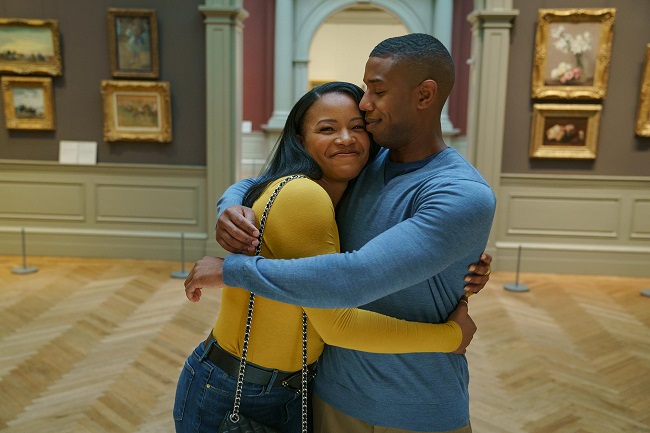 What Canedy received was a treasure trove of heartfelt wisdom that she and her son, Jordan, would treasure forever. The words of King became the basis for a best-selling book titled “A Journal for Jordan,” and a film adaptation of the book is scheduled for release on December 25, 2021.

The moment Canedy opened the journal and began reading it, he realised it was exceptional.

During King’s deployment to Iraq in the early months of 2006, Jordan was born. King was unable to be present during his son’s birth due to his duty to his troops, but he did return home for two weeks to spend time with his 5-month-old son. King enjoyed spending as much time as possible with the boy, but he also kept up with his writing.

Canedy remarked, “He became infatuated with this journal.” He devised an exercise plan for Jordan, told him why he loved me and why he wanted a son, and wrote 200 pages about the power of prayer and how to choose a wife, all while stationed in Iraq.

Stories of the joy of seeing a rainbow after a storm were interspersed with his frequent emphasis on the importance of respect for women and his pride in his military service.

Canedy added, “And on the last page, he essentially wrote a letter saying, ‘This is everything I could think of to teach you to be a man if I don’t make it home.'”

Their darkest fears were realised on October 14, 2006. A roadside bomb exploded in a truck in Baghdad, killing King and several others. And so, King’s notebook became one of the few tangible remnants of Canedy Sr. that his son possessed.

Learning to Live with Loss

Canedy, who had been a journalist for The New York Times for ten years at that point, turned to her forte in order to cope with her loss.

“I just can’t sit here as though this didn’t happen. I have to do something,” Canedy said of returning to work after Charles’ funeral. When I first heard about him, I thought, “I want people to know about him.

I want them to know about the journal, but I also want them to know what it’s like when you get that knock at the door.” So I wrote about it in The New York Times as a story, and then one of my coworkers sent me a note saying, “Our readers will demand a book.”

Canedy published “A Journal for Jordan: A Story of Love and Honor” within a year, and it became an instant hit.

That heartbreaking tale of love and death and the lasting impact it leaves behind has finally made it to the big screen, thirteen years after it was first published. Michael B. Jordan plays King and Chante Adams plays Canedy in “A Journal for Jordan,” a Sony Pictures film directed by Denzel Washington.

Expressions of Love that Come to Life for Them

Canedy was the film’s producer and had a hand in almost every step of production, from ideation to final cut. On set, she and Washington laboured over such minute particulars as the make and model of King’s car and the precise moment she first felt romantically attracted to him.

As Canedy explained, “the first day we went to the set, I took a small duffel bag that had Charles’ Purple Heart in it. It had his dog tags, and it had the actual physical journal and some other items to give [the actors] a sense of us – of who he was,” and to remind them that there was a real soldier behind the story. All of those present were profoundly affected.

When he enlisted in the Army in 1987, King was nearly 30 years old and a native of Mobile, Alabama. He had spent his youth honing his artistic abilities at the Art Institute of Chicago, where he learned the technique of pointillism.

His commitment to his art persisted throughout his several deployments, the first of which occurred during the Gulf War in 1991.

Canedy said that drawing was a sort of therapy and relaxation for him, and that he sketched anything from babies to elderly people to soldiers. We count ourselves extremely lucky that Jordan will always have access to his father’s artwork.

The Film Features One of these Items.

“There’s an early moment where the camera moves to a wall and there’s a framed picture of an angel,” Canedy explained. That was completely created by him, he said.

Canedy’s personal stories and props, she added, helped bring the story to life on set for the actors and crew.

“It’s more accurate than I honestly would have thought,” she said of the film. The beauty of it is unmatched.

Young Jordan (now 15) was first exposed to the magazine. Canedy explained that she hid it for a while so he could just be a kid, but once he started asking questions, she brought it back out. She said that it is more than a journal; it is a discussion that he has been having with his father through the years.

Canedy believes that his son “understands it in a manner that a 15-year-old boy does,” but that “he will understand it at a different level when he is 30 years old, depending on where he is in his life, and even when he is 50, when he is 60,” regardless of his current age. That’s the great thing about it; it will have different significance for him at various stages of his life, just as it did for mine.

Canedy has expressed her desire for the film to serve as an inspiration to those who are struggling to overcome sorrow.

Canedy recalled how she had “collapsed on the wooden floor screaming” after hearing the news of his death. If you’re going through something tough in real life, I hope the movie reminds you that you can get through it.

Veterans and civilians alike have told Canedy throughout the years that she encouraged them to put pen to paper after reading her memoir and reading the journal. But what she really wants is for the story of military families and the sacrifices they make every day to be told via her story.

Many service members and their families have thanked her for shedding light on the difficulties of military life and the dedication required to serve one’s nation.

“It’s been incredible to see the outpouring of support from individuals all throughout the country and the world.” Thanks for read our Article A Journal for Jordan: A Story of Love and Honor.